What to look for when buying a 3D printer 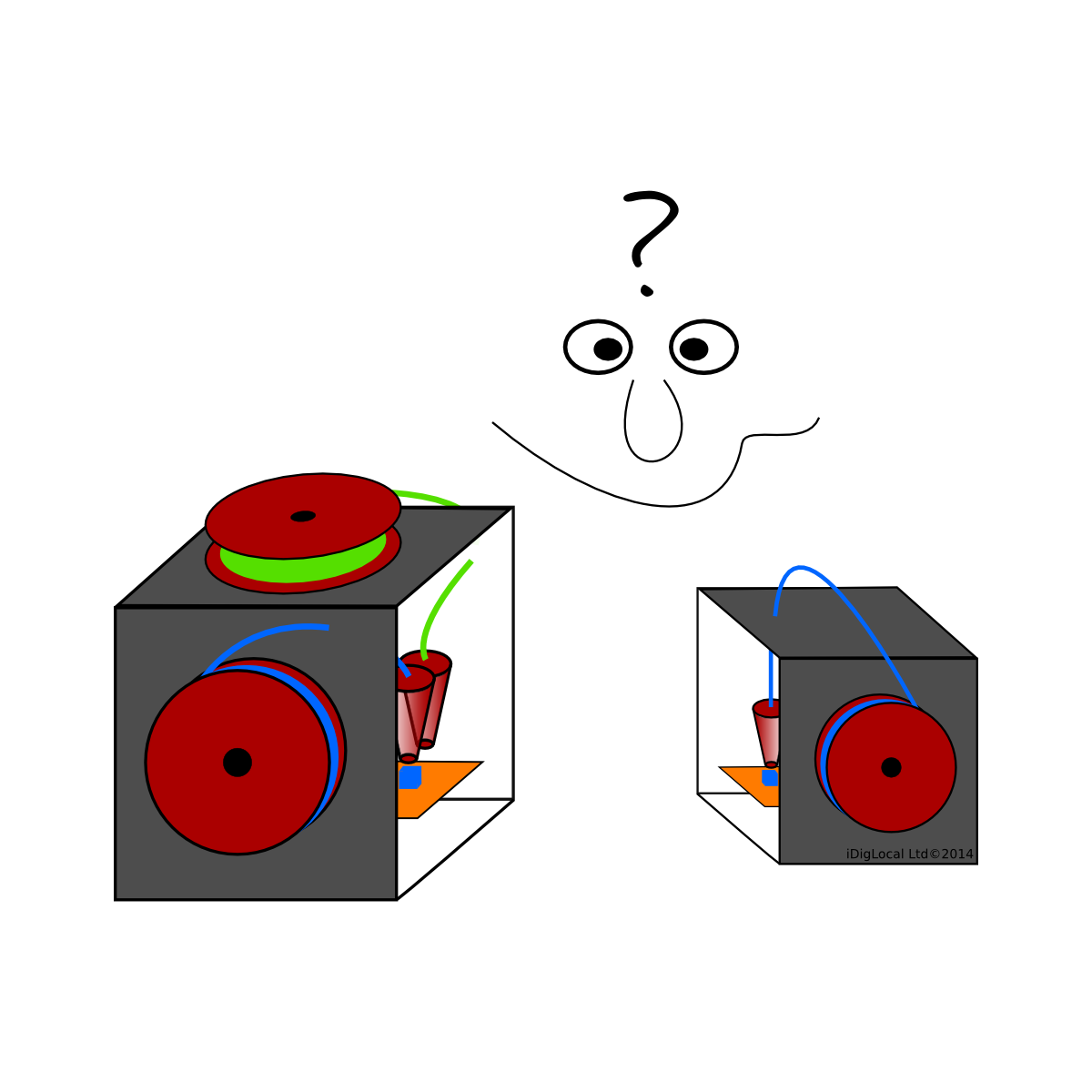 Buying a 3D printer can be an expensive choice so if you have decided to buy a 3D printer then you need to make sure that you are buying the right model for you. to summarise the main things to consider when choosing a 3D printer to buy are:

The maximum size that a 3D printer can build is determined by its build area. For instance the BCN3D Sigma R17’s build area is 21cm x 29.7cm x 21cm. These dimensions refer to the X, Y and Z plane of the build area. If you remember your maths the X and Y refer to the two horizontal planes and the Z refers to the vertical plane. It may be tempting to think of buying a 3D printer with the biggest build area but this could prove to be a expensive and unneeded luxury. 3D printed objects are often built from many different smaller parts, so even if the final object is large the size of each individual component may be relatively small There are also disadvantages to printing large objects, for one thing larger objects take longer to print. This may not be a problem in of itself, but if the print goes wrong then large amounts of time and material can be wasted. It is often better to print many smaller objects than one large object. A build area of 14cm3 should be more than adequate for most things but it really depends on what you are planning to make with your 3D printer.

The other thing to consider with the build area is does the printer have a heated print bed or and enclosed print area. If neither of the former then printing materials like ABS or Nylon or other filaments prone to warping is going to be a big problem.

The raw material or the “ink” for a 3D printer is called filament and this filament passes through a heated extruder where it reaches a temperature that melts the filament. As the melted filament is laid down on top of itself it builds up a 3 dimensional object. This is the basis for most 3D printers and is called Fused deposition Modelling (FDM) or sometimes Plastic Jet Printing (PJP). Therefore in order to print in different colours at the same time or with different materials more than one extruder are required. Multiple extruder machines are becoming more common, for example the Robox Dual Material and CubePro have 2 extruders. We stock a range of dual extruder 3D printers.

The advantages of buying a 3D printer with multiple extruders are:

The quality of the finish of your 3D printed model is determined to a large extent by the 3D printer’s resolution. A 3D printer has 2 measures of resolution:
in the horizontal plane (along the X & Y axis); along the vertical plane (the Z axis). The horizontal plane resolution or, as it is sometimes called, the feature resolution determines the level of detail that your finished object will have. The vertical resolution can have a big impact on the smoothness of the finish, the lower the resolution the bigger the steps or the rougher the surface will feel. The general range for 3D printer resolutions is around 100µm or 0.01cm to 200µm or 0.02cm. There are printers out there with greater resolution but then you will obviously have to pay for it, it depends on your ultimate goal. Also bear in mind that the greater the resolution, the more layers are deposited and so the longer the print time. Some printers will allow you to adjust the resolution. This can be very useful if you want to reduce print time and the use of materials when prototyping and testing 3D printer models.

Although there is a tendency for manufacturers to promote z-resolution one should also pay attention to your x-y resolution. To a large extent this is determined by the nozzle diameter used, how thin a bead of plastic one can extrude. So for smaller features you should look for a printer that has a smaller nozzle diameter, or has the ability to use interchangeable and smaller diameter nozzles. But one note, there is a trade off between z resolution and xy resolution. The lower the z resolution, the thinner the layer you print, the wider the bead of plastic as the lower extrusion height tends to squash down on your extruded bead and so increase the diameter of your extruded plastic bead and therefore reduce x-y resolution.

3D printing is not a quick process. To printing a phone cover can take around 2 hours. Essentially, the larger the object, the more complex its form and the greater the 3D resolution the longer it will take to create your 3D printed model. Additional to the impact of the objects characteristics on print speed, print speed is also determined by the mechanics of the 3D printer itself. The print head or extruder exists in two moving states, one when it is actually printing and one when it is moving to a new area to start printing. The overall print speed of a 3D printer is defined interms of mm/sec, when comparing 3D printers to buy take a look at this technical specification. A print speeds start at around 20mm/sec and go up.

3D printer filament is the ink for 3D printers. Most printers use 1.75mm or 3.00mm diameter filament but this is not an important detail unless a particular size becomes the industry standard, in which case buying a 3D printer that uses the less common diameter filament may prove to be problematic. Most 3D printers use 1.75mm, here at iDig 3D Printing we sell both sizes of filament. Most 3D printers will use filament from any manufacturer as long as the material is compatible and the diameter of the filament is correct. Some 3D printers do however use there own bespoke cartridge system. Using cartridges can be more costly but there are advantages. Cartridges are designed to be easy to change there design has been integrated into the overall system. Using a loose spool can result in your filament becoming tangled and the filament is not smoothly fed into the extruder leading to inconsistent print quality. Cartridges are fitted with sensors so that the 3D printer will know when the filament is going to run out and take appropriate action. If you want to start your print and walk away a 3D printer with a cartridge system may be what you want to buy. There are work arounds for these cartridge systems but we do not recommend them. The advantages of buying a 3D printer that can use open reel 3D printer filament is that it is cheaper, you get more for your money. Additionally, there are more types of materials and colours available to create with.

Most 3D printers will now except ABS and PLA. I am not going to go into great detail about the pros and cons of different 3D printer filament material and will live that for another post but as a quick note, the advantages of PLA are that it is more environmentally friendly as it is a bioplastic but ABS will generally result in a smoother finish. Remember to take a look at whether the 3D printer that you wish to buy will print in the materials that you want to use.

There are also a range of speciality filaments that are available with different material properties like heat resistance, flexibility, surface finish and durability.

What ever you decide to go for, which ever 3D printer suites your needs remember that this is a relatively nascent technology. Even the most plug ‘n play 3D printers will require a degree of learning so that you can get the best results from 3D printing. Common problems are Warping, model adhesion and blocked nozzles. You are likely to encounter these problems at one time or another using a 3D printer. The quality of your prints and your failure rate are going to be a product of the printer X the material you use X the printer settings X the model your are going to print X the environment the printer is in X YOU! That is a lot of variation. But don’t worry, as you get more used to using your 3D printer you will develop a process that becomes repeatable and will ensure that you get the best out of your 3D printer, consistently. Don’t forget if you have any 3D printing questions just get in touch to ask.

So that was our brief guide to things to consider when buying a 3D printer, hopefully it will give you some food for thought.